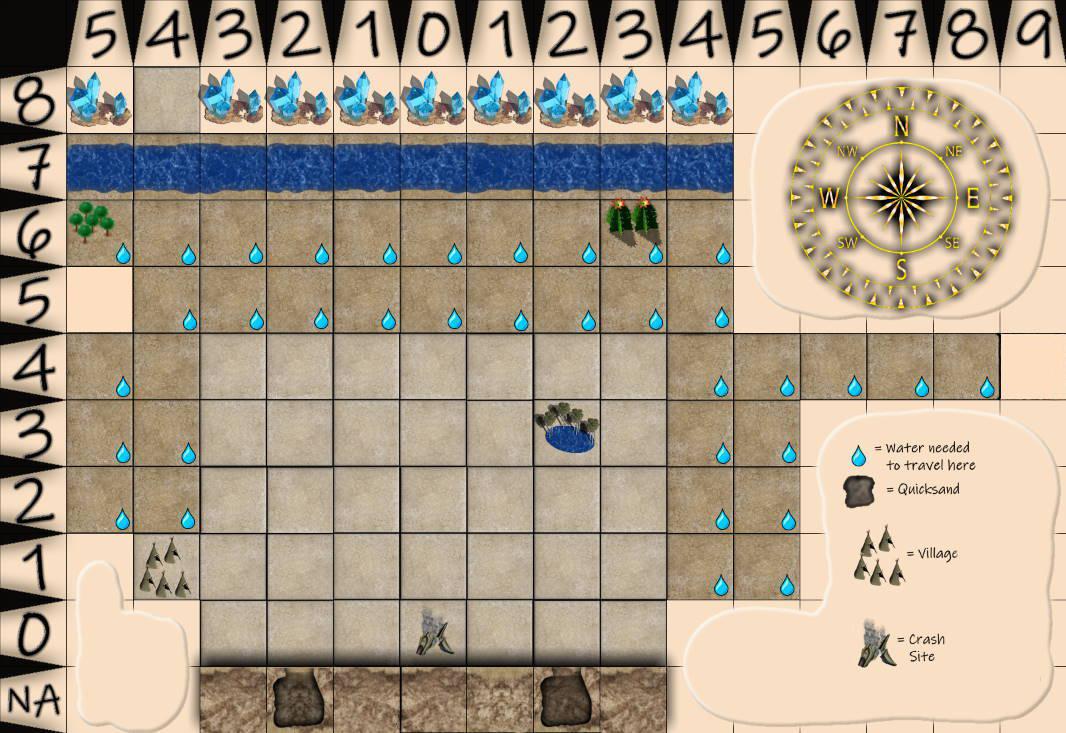 Shipwrecked is located at Venus > Ember Caves and requires the player to be lvl 30 to enter, and the main ending rewards the player with the Worm Slayer (White heavy weapon with 390 base stat and 300% crit perk.

This guide will not go input-by-input like the others due to Shipwrecked's complexity and length, and will instead be more a guide on how to progress.

Firstly, please use this map created by Bhelogan (the creator of this story) as it will be used as a reference throughout this guide. --> [LINK] (shown above) (note that there is quicksand at (3N 5W), (4N 2W), (4N 4E), and (1N 5E), stepping in quicksand without the 10' pole will instantly kill you)

The opening sequence is as follows: Disable the Bomb > Green Wire > Blue Wire > Cut the Red Wire > Power off the Engine > Run Alignment > Power the Engine On > Prepare for a crash landing!.

First thing you want to do after landing is to head to the Oasis (3N 2E) and fill up all 5 water skins.

Then you want to head to (4N 3E) and then go North twice (to 6N 3E), collect a flower, and then South twice (be careful not to misclick otherwise you might run out of water and die, thus being forced to restart).

Return to the Oasis and fill all the water skins but one (this is very important for the upcoming language puzzle).

Now that you have access to the settlement, you'll want to Explore the Town

TO GET THE FIRST ENDING PRESS "SETTLE DOWN AND LIVE WITH THE NATIVES", OTHERWISE KEEP FOLLOWING THIS GUIDE TO GET THE OTHER ENDINGS

You will then want to climb the cliff at ((0N 1E) and follow the steps to open the chest and receive the shovel).

Then, you want to climb back down, head to the crash site (0N 0E/W) and dig to receive the 10' pole, which will allow you to survive quicksand.

You can then go to (1N 5E) to dig up an infinite amount of water skins so you never have to worry about buying them (if you dig up enough to make your item count reach ~60 you should have more than enough to never worry about refilling them again after the first time, if not then refill them when mentioned).

You will then want to re-fill all your water skins, and then collect another flower, return to the village and purchase the Knife and torch (you'll need to do the trip 2 times since you can only carry a single flower at a time)

Once you have all of those items, head to the cave entrance at (0N 2E), enter the cave, punch the bear first and then finish it with your knife. You will receive the Heavy Blaster upon doing so, but won't be able to use it yet.

From there, go East > East > North and then East to (4N 8E), where you want to enter the Hermit Hut.

FOR THE POLE VAULTER ENDING, YOU HAVE TO DIG AT (2N 5W) TO RECIEVE A SENSOR, FOR THE WORM SLAYER ENDING YOU CAN SKIP THIS

You will now want to head to 6N 5W and cut down trees with the hatchet, and combine this with your rope to make a raft.

Head to (6N 4W) and then use the raft to cross to the other side.

FOR POLE VAULTER ENDING, YOU WANT TO VAULT OVER THE CRYSTALS AND THEN USE THE SENSOR, FOR THE WORM SLAYER ENDING CONTINUE FOLLOWING THE GUIDE BELOW

Once you cross the river, dig to collect the Crystal and fill up all your water skins

Then, return over the river and head to the Settlement

At the settlement, you will now be able to purchase a power core using the Crystal you found (make sure to also go back and pick up a flower so you can buy some more rope before continuing)

Head to 0N 2W and enter the cave, and then use the Heavy Blaster with the power core to kill the Worm.

From here on you are on a 'timer', so it is crucial to make sure you don't make any mistakes

This should take you out of the cave, and then there will be some straight forward options to finish the story and receive the Worm Slayer ending (and the heavy weapon that comes with it)
Wiki Home 2021-04-03 05:32:53 by wsey54